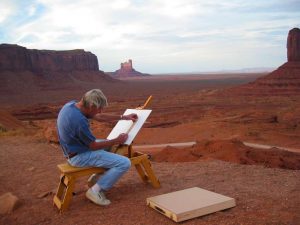 Few things loom larger in the landscape of American cultural identity than cowboys—the itinerant, horse-riding cattle herders mythologized since the nineteenth-century by popular culture, and Indians, the indigenous peoples pushed from their lands by American expansionism, first demonized and then romanticized in mainstream American popular art and film. Now in “West of the Imagination,” a series of oil paintings in which Franklin Speyers explores the iconic landscape of these figures, celebrating the beauty of the West and questioning the romanticized representations of Western life.

Speyers, a professor emeritus of Art and Design, crops, recontextualizes, and invokes the huge sky motifs of Jacob van Ruisdael, the seventeenth-century Dutch landscape artist, in a series of distinctly contemporary paintings and thereby invites viewers to interrogate their personal narratives of the West.